Principle 10 is about the nuts and bolts of forest management, the day-to-day realities that underpin everything foresters do.

Principle 10 addresses a range of practical issues, all of which must be dealt with appropriately and well both to ensure the achievement of management objectives and to avoid negative social, environmental and economic impacts.

This Principle requires owners and managers to choose and implement their management activities so that they are consistent with their economic, environmental and social policies and objectives and in compliance with the Principles and Criteria collectively. 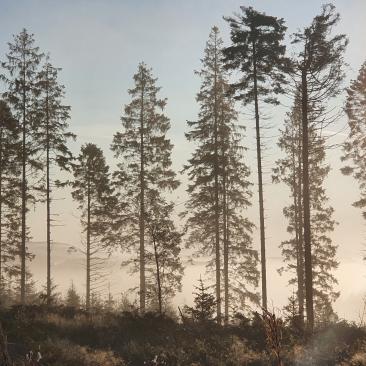 For FSC Forest Management certificate holders, compliance with these requirements is assessed by independent certification bodies using the set of indicators adapted to national, regional or local conditions in the applicable approved forest stewardship standard.

Indicators adapted to the UK context are contained in our national forest stewardship standard, familiar to most forest managers as the UK Woodland Assurance Standard, or UKWAS.

There is a lot going on under Principle 10, and this would be a very long article if we discussed all of its implication for forest management in the UK. Instead, we will focus on a few key issues:

Background: forest cover in the UK

All of the above, and more, helps to put Criteria 10.1 to 10.5 into context in the UK. What we say about species choice has to take account of the realities of the current composition of our forests. We also have to think about the resilience of our forests to climate change, pests and diseases. Unfortunately, opinion is divided as to whether we should address resilience by emphasising the ecological adaptation of native species or the diversification of non-native species.

Indicator 10.2.1 The range of species selected for new woodlands, and natural or artificial regeneration of existing woodlands shall be suited to the site and shall take into consideration:

Maximum and minimum percentage requirements for different groups of species were removed from the current version of our national standard, UKWAS 4, on the basis that this ‘forestry by numbers’ approach often resulted in perverse outcomes in practice. The standard instead emphasises the need to select a range of species, and to take account of resilience and biodiversity; whatever the exact approach taken by the owner/manager, this should result in diversification of species.

One topic which has arisen during the development of UKWAS 5 is that of natural regeneration of non-native conifers. While owners/managers might welcome this in parts of the forest, it might be unwelcome on open habitats or in semi-natural woodland, whether inside or adjacent to the forest area. This is one of the factors to take into account in the ‘enhancement and restoration of habitats’.

Just as UKWAS 4 is not prescriptive about species composition, it is also not prescriptive about silvicultural approaches. (There is a specific percentage requirement for long-term retentions and/or areas managed under lower impact silvicultural systems in FSC indicator 6.6.2/UKWAS 4.6.2, but this as a measure to benefit biodiversity rather than as a more general management approach.) Instead, there is a recognition of the wide range of factors which must be considered when making management decisions, and a general steer towards lower-impact approaches:

The group which developed UKWAS 4 did not feel that it was feasible to impose specific limits on clearfelling given the realities of upland forestry, but more stringent requirements were applied to semi-natural woodland to help preserve its conservation value:

It is important to note that some traditional management practices which can have significant biodiversity benefits, most obviously coppicing, can require the felling of quite significant areas in order to introduce enough light to the forest floor. Achieving this in practice is not always straightforward, however.

We welcome engagement in the UKWAS review and revision process from any and all workers – whether direct employees, contractors, sub-contractors or volunteers – to ensure that their distinct needs are represented in the most effective way possible in the next version of the standard. We hope UKWAS will continue to challenge UK foresters to rethink their heavy reliance on a narrow range of introduced species, typically planted as single species stands, and on the system of clearfelling and replanting. A signiciant move towards continuous forestry approaches would be aligned with the Soil Association's position on Regenerative Forestry.

Integrated pest management and pesticide use

FSC’s position on genetically modified organisms was not particularly controversial during the development of UKWAS 4, but stakeholders responding to consultations on drafts of UKWAS 5 have noted that it would prevent the release of gene edited grey squirrels, which is being researched as an option to bring this invasive non-native species under control.

Pesticides, on the other hand, are a perennially controversial subject. The use of pesticides in UK forestry is tiny compared to that in agriculture, but we still have a responsibility to do what we can to reduce use further, to minimise risks to the environment and to human health. In our national context, the main uses of pesticides are for weeding around newly planted trees, controlling weevils which can lead to large losses of seedlings on conifer restocking sites, and controlling invasive non-native species like rhododendron. FSC encourages integrated pest management, or IPM, which can involve tolerating low levels of pest damage or changing forest management to avoid pest problems in the first place. Pesticides should be used only as a last resort. There are several requirements regulating pesticide use in UKWAS 4, but FSC indicator 10.7.4/UKWAS 3.4.2(a) is the main indicator which directly addresses IPM:

Indicator 10.7.4 The owner/manager shall prepare and implement an effective integrated pest management strategy that:

Since UKWAS 4 was approved, a revised FSC Pesticides Policy has been issued. The Policy imposes specific restrictions on the use of what FSC identifies as Highly Hazardous Pesticides, or HHPs. The current version also includes requirements for a system of environmental and social risk assessment to ensure a robust basis for choosing pest control options. UKWAS 5 will give greater prominence to integrated pest management and will explicitly incorporate environmental and social risk assessment requirements.

We always welcome feedback which can help to improve our standards in future. If you have any questions or comments about FSC’s forest management requirements in the UK, feel free to get in touch with our Forest Standards Manager Dr Owen Davies (owen@fsc-uk.org) or our Outreach Manager (Forests & Ecosystem Services) Amy Willox (amy@fsc-uk.org).